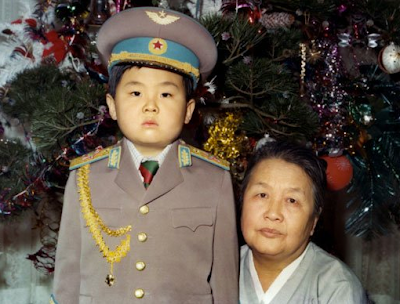 Anyway, King Jong the Third is what we would get if the wagging tongues of Seoul and Tokyo interviewed by Don Kirk of the Christian Science Monitor are correct.

From an article entitled "Another entrant for North Korea succession: Kim's oldest son?":


The oldest son of North Korea's leader Kim Jong-il appears to harbor secret ambitions of his own to succeed his father – despite the fact that his youngest half-brother has already been chosen as successor.

That's the impression Kim Jong-nam is creating here on the basis of remarks that his father would likely view as blasphemous. First there was his surprisingly frank interview with a Japanese televsion network, and then there are comments that he reportedly made to a contact in the gambling enclave of Macao, the one time Portuguese colony on the south China coast where he's been living.

Whose impression? The impression of those who refuse to admit they don't know anything and are furiously trying to cover up that fact by filling in the blanks with speculation, guesswork, and outright fabrications. The guy made it plain as rice that he doesn't want the job, which is being read as, "I want the job!"


Some analysts believe, however, that Kim Jong-nam is just waiting to see if Kim Jong-un can do the job – and has carefully left open the possibility of eventually returning to North Korea in the top position.

“He’s giving a strong signal that should the regime of Kim Jong-un collapse, then he’s the solution,” says Ha Tae-kyung, president of Open Radio North Korea, reporting by short wave for clandestine listeners in North Korea. "He knows North Koreans are disenchanted."

Kim Jong-nam’s remarks about North Korea’s impending collapse were quoted by a senior South Korean official, Lee Ki-taek, deputy chairman of the South’s national unification advisory council, in a lecture in Berlin. Mr. Lee, speaking to Koreans living in Berlin, attributed them to a source who had seen Kim in Macao last month.

Full disclosure, I may have added a twig or two to fuel this speculation. A couple weeks ago I wrote the following:


Kim Jong-nam is all right in my book. Sure, he's living high on the hog thanks to his father's kleptocracy, but he doesn't seem to want any part of the murderous regime. Frankly, I think by going on the record opposing transfer of power to himself or any of his siblings, he's inadvertently positioning himself to be a transitional leader if something goes awry.

Please note the word inadvertently. I don't think the guy wants the job. In fact, I think the Party Boy Mystery is no mystery at all: He wants to make crystal clear that he is not a threat to his little brother's rise to power, so don't kill me!

The guy just wants to go to Disneyland.