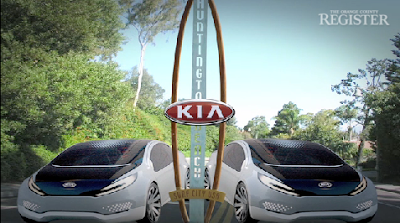 The Orange County Register, known for it's right-wing political stance, has produced a video entitled California 2015: A Look at the Future of a Troubled State.

This somberly narrated video takes trends and plausible forecasts and from there extrapolates a grim future for the Golden State, including the Big Orange. Amid prognostications of marijuana farms at the OC Great Park, corporate sponsorship of schools that require students to do five hours of community service a week for the corporate parent (which drives many illegal immigrants back to their home countries), they predict that Huntington Beach will be renamed Kia Surf City.