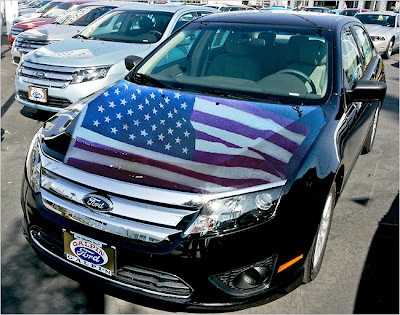 The New York Times has two interesting car pieces. The first tells us that more and more car buyers in the US "are reconsidering American cars because of improved fuel economy, good quality, and high-tech features":


“Ten years ago, the younger, more cutting-edge buyer was mostly interested in cars from Japan and Germany,” said Art Spinella, president of the consulting firm CNW Research in Bandon, Ore. “That is changing and changing fast. Detroit all of a sudden seems fresher than the competition.”

This revitalization has little to do with the government bailouts. People are considering American cars because of their improved quality and fuel economy, and high-tech features that are equal to or better than those offered by overseas manufacturers.

And this is not just about impressions. There are real numbers behind this:


Ford’s surge in quality has been particularly impressive. It trailed only the luxury brands Porsche, Acura, Mercedes-Benz and Lexus in initial quality.

And Ford has blown past Toyota, once considered the paragon of reliability for new-car buyers. While Ford registered 93 problems per 100 cars in the survey, Toyota had 117. The improvements at Ford have managed to change consumers’ perception of American vehicles in general.

“Ford has become almost the ‘halo brand’ for G.M. and Chrysler,” Mr. Spinella said. “Because of Ford’s success, people are less resistant in general to considering all of Detroit’s products.”

The second NYT article of note focuses on Hyundai, which took on Toyota and now has its sights set on BMW:

They already own two — a 2008 Santa Fe sport utility vehicle and a 2005 Elantra — and Mr. Harmon, a Chicago-area electrical contractor who owns several construction companies, has his eye on the Equus, a nearly $60,000 sedan that arrives in November.

“This will go head-to-head with the BMWs and Mercedes,” Mr. Harmon said. “If you test-drive all of them with your eyes closed, you’re going to pick the Hyundai.”

The idea that Hyundai could compete with luxury automakers would have seemed absurd two decades ago, when its low-quality cars made the South Korean company a laughingstock in the United States.

These days, rivals know not to underestimate Hyundai and its affiliate, Kia, which have been posting record sales during one of the auto industry’s most difficult periods.

“The challenge for the Korean companies is just to keep this winning streak going,” said James Bell, executive market analyst with the automotive information firm Kelley Blue Book. “In a lot of ways, they followed the Japanese model of how to succeed in the marketplace.”

But they are diverging from the Japanese model a bit:


But while Toyota and Honda built their empires largely on reliability and fuel economy, Hyundai and Kia have taken that formula a step further with a focus on making their vehicles attractive.

“You didn’t really buy a Toyota Tercel because it was a beautiful car,” Mr. Bell said. “The factor that the Koreans have added to that mix is styling.”

As a result, Hyundai and Kia are becoming a serious threat to the Japanese dominance of most passenger car segments. Hyundai’s midsize car, the Sonata, was the most researched vehicle in the country in May, according to Compete, a Boston research firm.

All this despite last month's recall. I guess it really is good to catch those things before they become a serious (even lethal) problem.

But that underscores the uphill battle Hyundai and Kia still face:


But for all their strides, the Korean companies still have work to do before they are broadly perceived to be among the industry’s elite brands.

“It’s still going to take time to get people into the cars and to spread the word of mouth,” said Mr. Champion, who described Hyundai’s foray into the luxury segments as selling “an Armani suit with a Wal-Mart label.”

Hyundai and Kia have been marketing themselves heavily to overcome outdated perceptions — in some cases filling voids left as the Detroit automakers pulled back on sponsorships and ads during big events like the Super Bowl.

“We didn’t use to see doctors and lawyers and that type of affluent buyer, because it just wasn’t socially acceptable to pull up in a Hyundai,” said Brian Malpeli, who has sold Hyundais since the brand’s early years and is the general sales manager at World Hyundai in Matteson, Ill. “But the more and more people start noticing us, the more they see the value in it.”

Though I did have a bit of Hyundai/Kia burnout — in Seoul, I've owned a used Hyundai Excel, then a Hyundai Sonata, and lately a company Kia Carnival, all of which I loved but I thought when I lived in the US again I'd take advantage of the diverse market — I would still consider a Hyundai Santa Fe, a Kia Sorento, or even a Genesis or some car like that, just on my own experience and the joy of getting a really good value. It's nice to know that ribbing about my car choice by others wouldn't really be a factor anymore.