Kim Jong-un about as visible as Biden

Did you know that America has a Vice President? His name is Joe Biden and he used to be a US Senator from Delaware. You might not have noticed because the guy's almost never in the press (though there was a blip about he and Secretary of State Hillary Clinton switching places sometime between now and 2012).

And why would I mention this? Because that was the best analogy I could come up with for the decidedly low-key takeover of North Korea by Brilliant Comrade Kim Jong-un, son of Dear Leader Kim Jong-il. 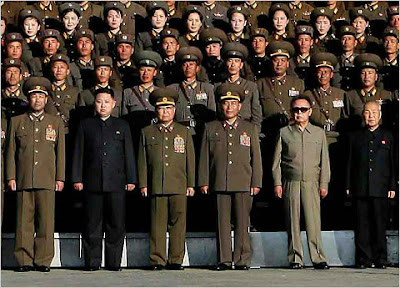 You see, the Western Press would have us believe that Kim Jong-un has practically already been crowned king of all he surveys in North Korea, but the reality may be something quite less. That is, the Western press has had to report something intelligent and substantial about this guy we know so little about, and they've all chosen to chase after the same story and sell the same banter.

But what does the KCNA have to say about this? Surely if Kim Jong-un's rise to power were so certain now that his presence has been revealed to the world, the KCNA would be falling over itself to report on the young man's whereabouts, his activities, and his wisdom.

So what are they saying about Kim Jong-un? The answer is: not much.

Going over this month's KCNA headlines, I found not a single news headline about Kim Jong-un. By contrast, his father's activities during the same period have warranted about one or two headlines per day.

Hmm... maybe Little Oval Unny is following Daddy Warbrinks around, so if I read the articles about Kim Jong-il, that's where I'll find the news about this shining young star, right? The answer: Well, not really.

Among the following KJI news items, KJU did not appear:

But Kim Jong-un did appear in these KJI stories:
But even in these two, Kim Jong-un only shows up in a long list of other participants; he certainly does not stand out, although his fancy new title (vice-chairman of the Central Military Commission of the WPK) is listed as well.

And I'd say that's low key for someone who has supposedly been unveiled to the public, a huge contrast to the daily stories about how the North Korean people and various foreign countries are congratulating Kim Jong-il on his re-election. That, my friends, is the big story up north.

What I think this means is that Kim Jong-il and his sister plan for KJI's third son to eventually take over the reins of power, but its acceptance is far from a done deal and KJI himself is still in power. I'm glad that the Obama Administration at least, according to Reuters, seems to get this.
on October 09, 2010