The World (of Animation) According to Bart

Banksy, apparently some homeless guy who was given a can of spraypaint as a school project, was given the honor of putting together this past Sunday's intro to The Simpsons [HT to John in 大田].

The theme, the dark side of pop culture consumerism (is there a bright side?), threw in quite a few news memes to take some serious digs at South Korea (in part by lumping it with North Korea) and the rest of East Asia — starving population, forced labor, child labor, animal cruelty, abuse of endangered species, and wanton dolphin slaughter), all while taking a dig at Evil Fox. 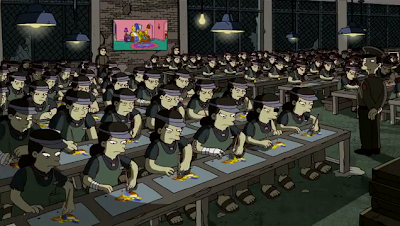 And it was beautiful (and perhaps timely). Of course, any fan of early episodes of The Simpsons knows that this is not the first time the show has poked fun at South Korea's cartoon industry (or Fox itself, for that matter).

Recall a certain Season 4 episode (circa 1994 1992), "Itchy and Scratchy: The Movie," where we have Kent Brockman caught up in the media hype surrounding the Itchy & Scratchy movie. He enthusiastically reports, "I'm here, live in Korea, to give you a first-hand look at how American cartoons are made!" while a prison-like scene of downtrodden animators frantically draws cel after cel as guards watch over them (and one soldier prods an animator with a bayonet).


Sure, this Banksy character is putting his own ignorance on display by conflating South Korea (where The Simpsons is drawn) with North Korea, China, Japan, and whatever country it is where unicorns come from (Nepal?), but no matter. The reproduction and amplification of such ignorance, after all, is one of the functions of mass pop culture consumerism that Banksy mocks, so I guess that ...

Whoa. I nearly made my head explode.

UPDATE:
The Marmot doesn't care much for Banksy's facile logic (and makes a pretty good case here that Banksy is an ignoramus).