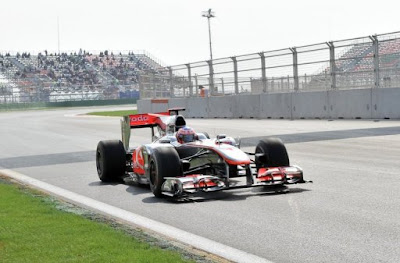 The track in Yeongam got a green light for the Grand Prix, but now drivers are expressing concerns about the "dangerous" entry to the pit lane.


The pit lane entry is situated on the outside of the anti-clockwise track, with cars braking in the middle of Turn 18, a blind right-hand corner in a narrow section of the circuit.

"The only worry I have is the pit entry, which is a bit dangerous. It's a little bit scary," Button said.

"It's a corner when you're on full speed -- 250km/h on the exit -- and if someone goes in the pits, they have to lift (off the throttle) quite heavily. That's a bit of a worry, and I don't really know how we're going to get around that issue.

"It's a horrible position to be in. What can you do when there's someone right up behind you? You're not going to stay out for another lap."

"The pit entry is quite on the edge because it is blind," he said.

"You cannot see if someone goes in (to the pits), and they have to go slower than someone who stays out. If you are behind someone trying to pass and he chooses to pit, it could be difficult."

Korean Grand Prix officials noted that not all drivers expressed such concern, and they added that the randomly chosen taxi drivers they picked to test-drive the track had all given it two thumbs up for safety.

UPDATE:
Though he gave a hat tip not to me but to someone who commented on this topic nine hours after I first posted about it, I'll link to The Marmot's post on the track's dangers (and other issues).