Was the Grand Prix a grand failure? 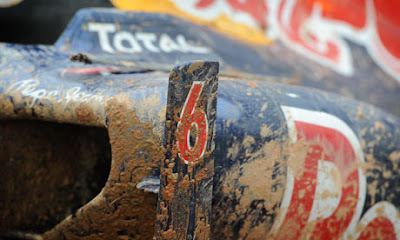 Let's start with a positive spin on things: Nobody got killed. (That was an actual concern just yesterday.)

But there was serious rain (Korea Sprinkling!™), spin-outs that took out a race favorite, and a brouhaha over ticket sales. And I won't even begin to get into the British press's new meme that Korea's ubiquitous love motels are actually brothels.


Questions have also been raised about ticket-selling practices. A report suggested that government employees were told to sell tickets, and a local taxi driver told the Korea JoongAng Daily that his daughter, who works in the area for Nonghyup, was forced to buy tickets.

Bad weather also hampered the event and caused some more concern for the Korean organizers. Rain started to fall before the race and one driver said he couldn’t even see the front of his car. The Grand Prix was delayed for more than 30 minutes and racers ran several laps behind a safety car.

Not surprisingly, the race itself was marred by a number of spin outs, including the two favorites, Red Bull’s Sebastian Vettel and teammate Mark Webber.

It clearly wasn’t an easy race.

“It’s the worst conditions I ever drove a car in ,” said Alonso over the radio.

Worst conditions ever? South Koreans wear that as a badge of honor, sir! Some of the best "worst conditions" I've ever been in were on Seoul streets (with a fog-enveloped Interstate-5 going through the San Joaquin Valley coming in a distant second).

At least the Korean organizers aren't being blamed for the spin-out, for which Red Bull driver Mark Webber of Australian has taken responsibility. If only he'd had wings. 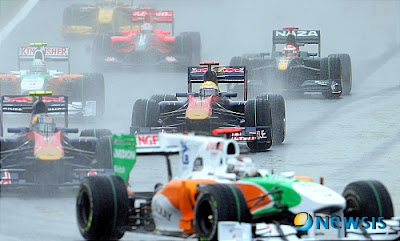 Ever the cautiously (and pragmatically) pessimistic optimist, I'd say that this was a good first run. And comments like this one at The Marmot's Hole only serve to encourage me:


Finally, talking to people after the race (at the track and at the train station) pretty much everybody said the same thing that the mechanics said; the weekend was far from perfect but was enjoyable nevertheless and that they look forward to returning next year. “better than I expected” seemed to be the tone of most peoples’ comments.

So, let's take a look at what we have. No one died, and there's now a chance to fix what was wrong. There's time now to fix what was wrong with the seats that were prudently closed off for safety concerns, move or alter the pit stop that the drivers warned was dangerous, fix the ticket distribution system, work on plans for better transport and accommodation, and maybe plan more contingencies for bad weather. It's like a B- on a midterm, which gives you a chance to raise it up to A-level. Maybe then the race would live up to the promise:

From what I understand, the big question mark over how much of the construction-still-being-completed facility would be available to the viewing public, as well as the looming prospect that the race would not go through at all, probably hurt plans to provide package deals and what-not, which will not be the case the next time around.

Start with making sure the used condoms are out from under the beds. We don't want to give the British press the vapours.