Hwang Jang-yop, may he rest somewhere else. 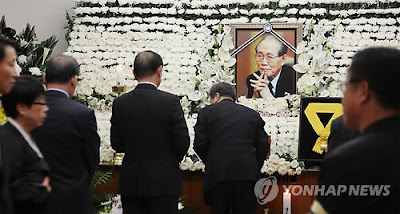 From The Marmot's Hole comes news that noted defector Hwang Jang-yop, an architect of North Korea's Juche philosophy, has been awarded a state medal, the first-class Order of Civic Merit, and will be buried at the National Cemetery in Taejŏn, a fact with which South Korea's liberal parties are not happy.

As you can imagine from this post, I sort of agree with The Marmot on this:


While I find the Democratic Party’s attitude regarding Hwang’s passing suspicious at best, I do agree with what some DP lawmakers are saying: the man was still one of the fathers of North Korea’s Juche ideology. To me, this means anything positive he might have done in his latter life (and he was an elderly man when he left North Korea) only begins to make up for what he did prior to his defection. I’m not judging him personally — I appreciate he might have been a changed man. The National Cemetery, however, is a very special place, and I just don’t think he belongs there.

Hear! Hear! As I noted at Destination Pyongyang, Mr Hwang's continued defense of Juche underscored a lack of culpability for the murderous regime up north:


But if we are to make such people poster boys for the cause, as many did with Hwang, some serious semblance of acknowledgement and even contrition for his crimes would be in order.

That disconnect between the lack of acknowledgement and contrition on the one hand, and the prominent role he played in condemning a system he helped create on the other, was what always made me uneasy about him. And to me, that tainted his otherwise worthy (and valuable) post-defection life.

Now this may seem harsh, but I think interring Mr Hwang in the National Cemetery is akin to enshrining the Yasukuni-14 at the ostensibly peace-promoting Yasukuni Shrine, an act performed by the shrinekeepers in the late 1970s. Not exactly the same, but with some very serious parallels.