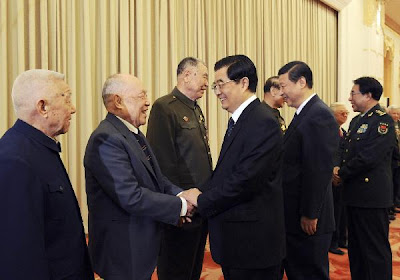 Beijing is celebrating the 60th anniversary of its troops entering the Korean War against South Korean, US, and other UN troops to keep Kim Ilsung and his regime in power, a move which all but cemented the permanent division of the Korean Peninsula.

Though the Chosun Ilbo has the story, I think China's official Xinhua news agency tells it best:


Chinese President Hu Jintao and Vice President Xi Jinping on Monday met with veterans and heroes of the Chinese People's Volunteers (CPV) to commemorate the 60th anniversary of the volunteer army entering the Democratic People's Republic of Korea (DPRK) to help in the war to resist U.S. aggression.

Hu is commander-in-chief of China's armed forces, while Xi has been newly appointed vice chairman of the Central Military Commission (CMC) of the Communist Party of China.

In his address on behalf of the CPC Central Committee and the CMC, Xi said that the Chinese movement 60 years ago was "a great and just war for safeguarding peace and resisting aggression."

"It was also a great victory gained by the united combat forces of China's and the DPRK's civilians and soldiers, and a great victory in the pursuit of world peace and human progress," Xi said.

Xi said the Chinese people would never forget the great contribution and sacrifice made by the nation's founders and, in particular, the people who made history during a war that saw the weak defeating the strong.

The Chinese people will never forget the friendship -- established in battle -- with the DPRK's people and army, he said. Xi also acknowledged the former Soviet Union's government and people who provided help to the volunteer army.

I think they're confusing their pursuit of pyonghwa with a march to Pyongyang. (Bad pun, sorry.)

Beijing's leaders are, in part, couching their participation in the war as defense of the homeland (as if Syngman Rhee was going to invade China):


Chinese ground forces, under the CPV, entered the Korean Peninsula on Oct. 19, 1950, to defend their own territory and to help the Korean People's Army (KPA) against Syngman Rhee's troops and multinational forces assembled in the name of the United Nations.

The CPV launched its first battle on Oct. 25 against a battalion of Syngman Rhee's troops. In 1951, the CPC Central Committee decided to commemorate the war every year on that date.

Xi said being peace-loving is a tradition of the Chinese nation and its participation in the war 60 years ago was a historical decision made by the CPC Central Committee and the late Chairman Mao Zedong based on serious national security threats and a request from the DPRK's Korean Workers' Party and government.

The heroism and international spirit demonstrated by the CPV in the nearly three-year battle as they fought side-by-side with the DPRK army and people will forever be treasured by the Chinese people, Xi said.

That international spirit today includes zealously rounding up refugees and sending them back to their North Korean client state to be tortured, imprisoned, and/or killed.

I wonder if China still teaches its young people that South Korea and the US started the Korean War? That is, I believe, still the official line.