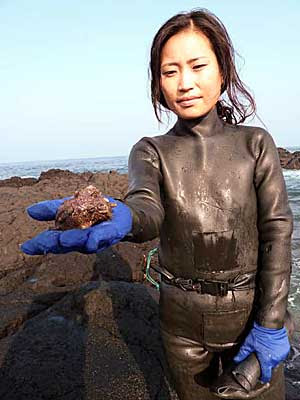 John Glionna of the Los Angeles Times has an article on a perennial favorite of the Western media (and South Korean tourism authorities): the haenyŏ (해녀/海女, literally sea women) of the southern island province of Chejudo and its outlying islands.

It is a familiar narrative of an almost matriarchal culture where women have enjoyed a much higher status than their mainland counterparts:


Like six generations of women before her on this treeless speck of land in the East China Sea, the young mother of two is preparing for a dangerous job no man here is allowed to perform: free-diving for minutes at a time to catch abalone and other shellfish.

Kim is learning to join the ranks of the haenyeo, or women of the sea, whose role as ocean hunter-gatherers has long given them special status in a Korean culture dominated by men. These women on a group of islands south of the South Korean mainland have turned tradition on its head.

Get dispatches from Times correspondents around the globe delivered to your inbox with our daily World newsletter. Sign up »

For decades, divers here have groomed their daughters for a life at sea. They teach them how to conserve oxygen to extend their dives and stress the importance of working in groups, like a herd of watchful seals, vigilant against shark attacks, rip currents and marauding motorboats that buzz the surface.

The diving, with its daily hazards and emphasis on teamwork, has molded the women into a cohesive group that has often gathered by the campfire with the day's catch to make decisions about village politics.

I haven't been to southern Chejudo in a few years, and I recall the women looking a bit older than Ms Kim pictured above. It would be nice to know that a younger generation is carrying on this iconic tradition (and making decent money off it). 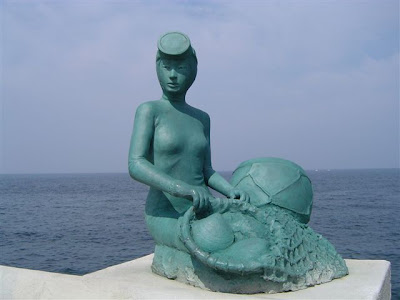