NPR on "an unusual private school" for North Korean defectors 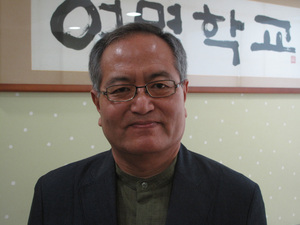 NPR has an interesting piece on a school in Seoul that is designed to help former refugees from North Korea who have made it to the ROK close the gap between what they learned in North Korea and what they need to know to live in South Korea:


In a nondescript building in central Seoul, an unusual private school is trying to teach young North Korean defectors how to survive in the South. The problems suffered by its students adjusting to life in a democratic state offer a window into life in the totalitarian North. 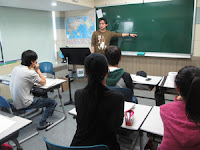 The first thing that is immediately noticeable at Yeomyung school is the disconnect between the age of the students — mostly in their 20s — and the simple subjects they're studying. In one classroom, two students are struggling to understand simple fractions, an elementary school subject.

Woo Kee-sup is the school's president.

"They missed many years of schooling because they [fled North Korea and were hiding] in a third country like China," he says. "And the education system in North Korea is basically demolished."

Formal education in North Korea is largely dedicated to extolling leader Kim Jong Il through songs and ideological classes, and even math problems may use political examples as teaching aids. Its aim: to teach obedience at all costs to maintain the regime, rather than teaching students how to think for themselves.

The piece notes its not just the three R's that require attention:


In drama class, clad in baggy jeans, students fool around, pretending to be robots.

But what may look like goofing off is actually therapy. These students are damaged, from years of hunger and the ever present fear of living in a society where neighbors inform on each other. Add to that the dangerous journey out of North Korea, which can take years living in conditions close to slavery.

As the students laugh and shriek, one girl is noticeable for her lack of participation. She sits alone, lost in thought, her expression bereft, a tissue in her hand. Young defectors suffer from shockingly high rates of depression.

"Ten percent of our students need medicating because they're seriously depressed," says Cho, the teacher. "More than 50 percent have been diagnosed as clinically depressed but don't need medication."

Perhaps it's good that these folks have a built-in reason for having depression, which gives them an excuse to visit mental health professionals, get diagnosed, and get treatment without fear of being stigmatized (a big problem for the general SoKo population).

It breaks my heart to hear about all these horror stories, and I always find it heartening to learn about groups helping them. I can't imagine what they have gone through to get to South Korea or what they're going through after they arrive. But it does give us an inkling of what we're in store for when and if the two Koreans eventually reunify. Imagine a whole country with post-traumatic stress disorder.

Oh, and if you're one of those who doesn't like my use of the word defector, please note that it was in the original NPR piece and, even if it weren't, I don't really see a problem with the word.