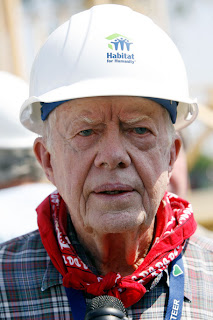 From US News & World Report:


Between hammering nails and raising walls in the chilly rain in front of a throng of news cameras, Carter took a moment to endorse another housing nonprofit, The Fuller Center for Housing, for a plan to build houses in North Korea, set to begin shortly. “They’ve already gotten permission from the government of North Korea to come in; they’ve already had a team there to assess the construction possibilities. This has to be a very flexible thing because as you know all of the houses in North Korea are owned by the government,” Carter said. “We’re just thankful that we’ll be able to get some houses built in North Korea for people in need.”

Say what? Carter worked out a deal to build houses for North Koreans? The very North Koreans who may have shoddy housing because their government is spending money developing nuclear technology and keeping its soldiers' bellies full? That North Korea?

Okay, while I'm happy that otherwise suffering North Koreans are getting decent housing (and who's going to build this stuff, President Carter?), I'm not so sure how I feel about handing over the keys to anyone connected to the Pyongyang regime who may then divvy up the housing based on loyalty and/or political favors.

I suppose if these are in rural villages, the chances of that are less likely, as those aren't exactly prime places for favored cadres to choose to live, but the peasants who end up getting even modest homes out in the sticks must, I would imagine, have to pass the loyalty test.

On the other hand, interaction with an American agency at a time when the DPRK may be looking for a pretext to open up may be a good thing, and I guess it's not like housing can be easily turned into food for the Army or anything (I'm still firmly in support of trying Plan B). I wonder also if this is on the up-and-up in terms of legality in dealing with countries like North Korea.

We'll have to see how this develops.


But upon arrival I realized that I already knew this story; it has been at the planning stage for three years or more, and now seems to be coming to pass. This organization, The Fuller Center for Housing, a religious non-profit not unlike Habitat for Humanity, is building 25 energy efficient duplexes in the middle of a collective farm near Sunan Airport, Pyongyang.

The post includes some analysis chris put together after sifting through some links related to the Fuller Center project.

Email ThisBlogThis!Share to TwitterShare to FacebookShare to Pinterest
Labels: Get Carter, Habitat for Humanity, North Korea