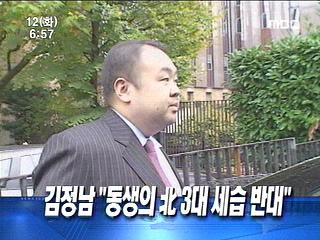 That might explain why he turned down the job. From AP, via WaPo:


The eldest son of North Korea's leader Kim Jong Il says he opposes a hereditary transfer of power to a third generation of his family.

Kim Jong Nam's remarks come after North Korea unveiled his younger half brother, Kim Jong Un, as successor to their father in Pyongyang.

Japan's TV Asahi showed Kim making the remarks in footage aired Tuesday from an interview in Beijing on Saturday.

Kim Jong Nam was once considered likely to succeed his father. He reportedly fell out of favor after being caught trying to enter Japan on a false passport in 2001.

Now lest you think our buddy Jongnam has a death wish of some kind, he did hint that he could get behind it if it's a done deal:


He said that while he was against the succession, it should still be accepted if there are internal factors for carrying it out.

Smart move. Maybe now they won't be gunning for you.

Kim Jong-nam is all right in my book. Sure, he's living high on the hog thanks to his father's kleptocracy, but he doesn't seem to want any part of the murderous regime. Frankly, I think by going on the record opposing transfer of power to himself or any of his siblings, he's inadvertently positioning himself to be a transitional leader if something goes awry.

UPDATE:
The Economist is now carrying the story, which includes more of Kim Jong-nam's interview, including some kind words for his younger brother:


"As a matter of course, I think it was my father who made the decision. As I have had no interest in the matter, I don't care at all," he said.

He added that he also hope that his brother could improve living standards in North Korea which remains desperately poor as a result of crippling economic sanctions and a Soviet-style command-economy.

Yeah, if I were him, I'd stay as far away from the DPRK as possible, too.