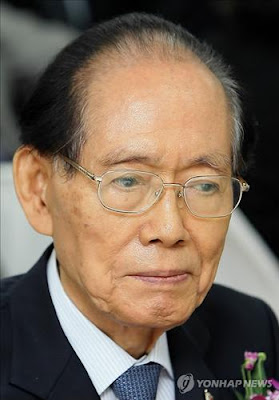 Hwang Jang-yop, the chief architect of North Korea's guiding Juche philosophy who defected to South Korea in 1997 and became a vocal critic of North Korea and any attempts to engage Pyongyang, has died of an apparent heart attack.

North Korea's leader, Kim Jong-il, reportedly had a special loathing for Mr Hwang and saw his defection as a particularly egregious betrayal. Mr Hwang became a mouthpiece for groups on the right opposed to the DPRK, and he became a valuable source of intelligence for Seoul and Washington. Let's just say he knew where all the bodies were buried because he helped bury some of them himself.

I've made no secret of my dismay that someone who was responsible for so much suffering became a poster boy for Pyongyang's critics. When I saw him speak at North Korean human rights events, I was not the only one who asked, "Why isn't this man in jail?"

Actually, I know the answer to that. And if we really want to bleed Pyongyang dry and let it die from a thousand paper cuts, we may have to hold our noses and encourage more people like Hwang to disembark peacefully from that sinking ship.

Requiescant in pace, Mr Hwang and all your victims.