And now a mini-rant on suicide and Tokto

KoreaBeat has his hebdomadal list of Naver's most-read stories last week, including these two:

6. Seoul will soon hold a festival to celebrate the nation's love of Dokdo.

South Korea would be better with less of stories like #5 and #6.

Although I firmly believe Japan's 1905 terra nullius claim to the islands is a throwback to its illegitimate imperial expansionism and Korea is the rightful owners of the islands, I've been saying for years that the response must not be so shrill and overblown.

We've got 'em, we own 'em, end of story. That's the way it should be in terms of response. Really, if there is that much extra money floating around to have a festival over Tokto, maybe it should be funneled into suicide prevention and promotion of treatment for depression and anxiety. Hmm?

UPDATE:
I wonder if perhaps I relied a bit too much on the KoreaBeat's simple headline. Upon actually reading the link, it appears that the Tokto story is about the Seoul Metropolitan Government not allowing (or canceling) the use of Seoul Plaza for the Tokto-ya Sarang-hae ("Tokto, we love you!") Festival. In fact, the cartoon below seems to suggest that. Hmm... 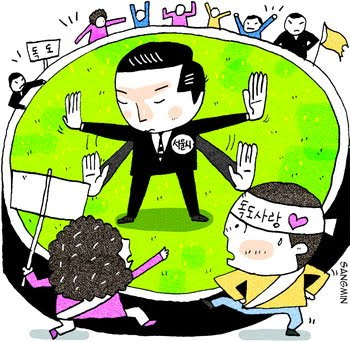 If I am right (and I concede that I could be completely misinterpreting things in my groggy state on this blustery Sunday morning in Honolulu, then this is part of a growing trend of politicos growing a backbone on this issue, where they were once afraid to say anything that would give fuel to the pro-Pyongyang chinboistas or right-wing nationalists who would use their Tokto unorthodoxy as a club to beat them with later.

UPDATE 2:
KoreaBeat agreed with my point and changed the headline:


6. Seoul denied use of Seoul Plasa to a festival to celebrate the nation's love of Dokdo.

Email ThisBlogThis!Share to TwitterShare to FacebookShare to Pinterest
Labels: suicide in Korea, Tokto