LAT on Kang Cholhwan, exposer of the North 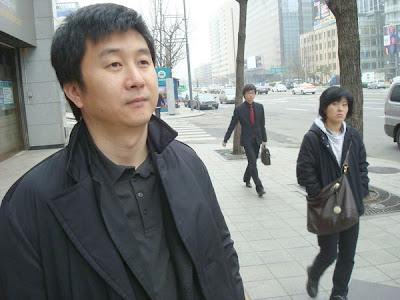 John Glionna of the Los Angeles Times has a piece on Kang Cholhwan, he of Aquariums of Pyongyang, a book describing his harrowing experiences growing up in North Korea's Yodok prison camp.

The article tells the story of his life in the camp, a story familiar to the book's readers, but the second part gets into his current activities trying to shed light on the North through journalistic means:


In 2000, Kang took a job as an investigative reporter covering North Korea for the Chosun Ilbo newspaper. The work provided a new way to rattle the regime: telling the stories of fellow survivors.

His own experiences led him to feel particular compassion for other defectors. Kang wrote columns and exclusive stories on the failing North Korean economy, human rights abuses and succession scenarios in the eventual death of Kim Jong Il, the country's current strongman.

He interviews defectors who are reluctant to talk, until they learn that Kang is one of them, a battered fighter who has punched his way out of the North.

His fellow escapees have taught him a valuable lesson about his homeland.

"I thought I had been through the hardest time," he said. "After hearing their stories, I now realize something I never thought possible: that the situation there is actually getting worse."

If you haven't read his book, do so as soon as you can. I think I should reread my signed copy. Mr Kang is an affable person, with a smile and demeanor that belies the hell he went through when younger, but it's all right there in the book.