It's April 20 here in Hawaii-Aleutian Standard Time, even if it's already April 21 in this blog's cyber home, UTC+9. I have nothing really to say about pot-smoking in the Aloha State or the Golden State, but this is apparently a big day for some people, and already I've been getting hits from people Googling, say, UCI + 420 + party + marijuana.

Such a gathering sounds exciting, but all that search gets them from me is this post on the prospect of a ballot proposition to legalize marijuana, which will be on the November ballot (the Los Angeles Times is against legalization — for now). 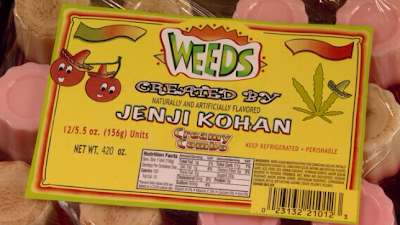 That's not really enough to prompt me to devote an entire 420 post, but two days ago I discovered the Netflix's online offerings now include seasons 4 and 5 of "Weeds," a very witty and cleverly written program about a suburban widow who sells pot — and gets in way over her head — to make ends meet. While the theme of the show seems sympathetic to relaxing or eliminating marijuana prohibition, its comic portrayals of drug use are interspersed with caveats about the dangers of stronger drugs, as well as subtle admonishments about the paranoia and stupid behavior that comes with pot use itself.

Meanwhile on the incoherent list of things remotely related to this day, my The Sonagi Consortium post on Hurley's car included a link to the revival of Cheech & Chong, the "Get It Legal Tour." I, for one, am excited about this exercise in democracy and social experimentation, even if I still have a slight bit of ambivalence about legalization. I'm also looking forward to seeing how "Weeds" deals with the prospect of legalization, now that I see that Season 6 will begin airing in August (I had thought it was canceled after the fifth season).

And now if you'll excuse me, I'm going to watch episode 4 of season 4 while I enjoy my macadamia-vanilla coffee. This show is pretty much the extent of my involvement with pot.

I would like to be president some day so, no, I have not smoked marijuana. I ate a brownie once, at a party in college. It was intense, kind of indescribable, actually. I felt like I was floating. Turns out there wasn't any pot in the brownie. It was just an insanely good brownie.*

Email ThisBlogThis!Share to TwitterShare to FacebookShare to Pinterest
Labels: marijuana