Tensions "boil over" for European travelers stuck in Inchon 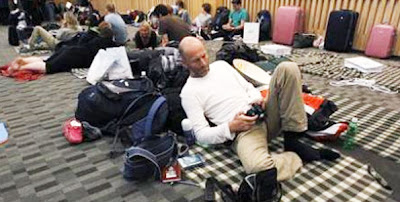 I think it's the fake European food at the airport that has driven them over the edge. Anyway, this snippet from an AP article was in today's USA Today:


Tensions boiled over among frustrated passengers at Incheon International Airport in South Korea, where 30 people blocked a Korean Air ticketing counter and demanded officials arrange travel to anywhere in Europe after hearing about the test flights.

"We need a flight, we need a time," Thierry Loison, who has been stuck at the airport since Friday on the way back to France, told Korean Air officials. "We were like animals this morning."

Frankly, I don't know which side to sympathize with. I mean, it's not like IIA created the volcano or made the decision to postpone the flights. The best they can do is make sure that the non-Korean-speaking transit passengers are able to be housed and fed without being price-gouged, and that shouldn't be too hard with the E-Mart and LotteMart in the business complex near the airport or in Airport Town Square a few kilometers to the east. Right now I'm seeing reports of basic amenities, but I'm not sure that's enough.

And the more freebies they can give, the better. Portable cots (if they even have those), blankets, food vouchers, free showers, free laundry service, etc. If IIA left these transit passengers scrambling on their own (which doesn't seem likely, but nevertheless possible), then they do deserve criticism.

But I wonder how much of this is the irate rantings of people who are lashing out about the gross inconvenience and cost of being stranded for Lord knows how long, perhaps to the point of being unreasonable. These are test flights, not regular flights, and they still don't know who is going to fly from where, and there a new cloud of ash is wafting toward Mainland Europe. That said, Korean Air and any other airline with its transit passengers stuck in Inchon should try the best they can to take the high road and get these folks as close to home as possible. It's just good business, and the kind of thing you'd expect from a place trying to be recognized as the world's best airport.

Here's an idea: Maybe anglophone foreigners and KoKos alike could organize as volunteers to take the stranded travelers on day trips into the city, to give them something to do and hopefully see this delay as an extension of their vacation. Could someone back in Korea right now alert Seoul City Hall and Incheon International Airport to this idea? I'll even let you take credit for it.

UPDATE:
I forgot Brian did a lengthy post on this.