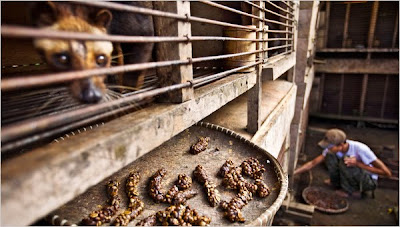 A couple months ago Stafford mentioned the kind of coffee where the beans have been passed through a civet — that is, they are salvaged, post-digestion, from the dung of one of these cat-like creatures.

Well, almost on cue, the New York Times has a piece on this delicacafécy, along with the above picture and the description below that may scare off the squeamish:


Reaching a valley where coffee trees were growing abundantly, he scanned the undergrowth where he knew the animals would relax after picking the most delicious coffee cherries with their claws and feasting on them with their fangs. His eyes settled on a light, brownish clump atop a rock. He held it in his right palm and, gently slipping it into a little black pouch, whispered:

Not quite. But Mr. Sibayan’s prize was the equivalent in the world of rarefied coffees: dung containing the world’s most expensive coffee beans.

Costing hundreds of dollars a pound, these beans are found in the droppings of the civet, a nocturnal, furry, long-tailed catlike animal that prowls Southeast Asia’s coffee-growing lands for the tastiest, ripest coffee cherries. The civet eventually excretes the hard, indigestible innards of the fruit — essentially, incipient coffee beans — though only after they have been fermented in the animal’s stomach acids and enzymes to produce a brew described as smooth, chocolaty and devoid of any bitter aftertaste.

Oh, did I mention the civet-SARS connection? I'm no expert on animal-borne pathogens, but I would want to first figure out if consuming something from the feces of wild civets were a healthy thing to do before I had a cuppa, and the NYT article doesn't really address that. I would imagine, though, that the heat from the brewing process would kill most pathogens. But like I said, I'm not expert.

The article also notes that the big buyers of this stuff are South Koreans and Japanese, but unlike a lot of trends in the ROK which start out pricey but become more accessible as more providers fill the marketplace, the bottleneck is back at the source, where civet cats are in short supply. I guess the massive cull during the SARS outbreak didn't help that much.

Email ThisBlogThis!Share to TwitterShare to FacebookShare to Pinterest
Labels: coffee