Land of the rising son 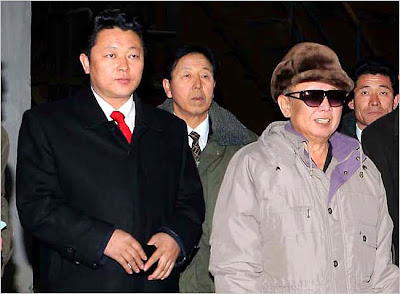 The Washington Post has a piece on the "Kremlinology" surrounding the enigmatic son of Dear Leader Kim Jong-il and how his rise to power may end up being cemented — or not:


It is the pudgy but stern-faced young man next to him, dressed in a snappy Western suit and dutifully scribbling in a notebook, who has spurred intense speculation. Could this unidentified man be just a plant manager? Or could this be the first public appearance of Kim Jong-un, the North Korean leader’s third son and heir apparent?

“There, see how his face is in focus and illuminated even more than Kim Jong-il himself?” said Cheong Seong-chang, a specialist on North Korean politics at the Sejong Institute. “There is a high possibility that this is Kim Jong-un.”

Little is known about the inner workings of the secretive North Korean government, not even the identity of the heir apparent. But if Mr. Cheong is right, the enigmatic photographs are the latest signs of the desperate push that the North Korean government is making to build a cult of personality around the son, who is believed to be 27, to prepare him to assume control as the current leader’s health declines.

Already the conclusions made from this photo have been discredited by some who say it's not Kim Jong-un at all, and I'm not convinced. The guy doesn't really look like Kim Jong-il that much, though he seems to have that wavy hair. He also seems a bit older than twenty-seven and he's not wearing the Secret Juche Inner Circle Decoder Ring.

All this underscores how little we really know. After all, up until very recently, Korean intelligence thought his name was 기정운 [kim chŏng•ūn], not 김정은 [kim chŏng•ŭn], based on the English spelling! That is how pathetic our knowledge of the inner workings of Pyongyang really are.