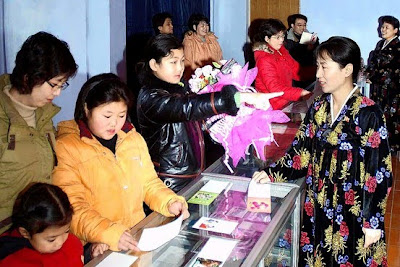 Professor Lankov has a good article in the Wall Street Journal talking about the rise of women in North Korea's quasi-underground markets. It's still worth reading even if I give away the ending:


The situation of women was different. They had time, and their involvement with private trade was seen as less dangerous—precisely because of the patriarchal nature of a society where only males' behavior really mattered. In some cases women began by selling household items they could do without or homemade food. Eventually, these activities developed into larger businesses, and today at least three-quarters of North Korean market vendors are women.

For many North Korean women, the social disaster of the 1990s has become an opportunity to display their strength and intelligence. In recent months those women have become the primary target of government policies designed to destroy private enterprises. But the experience of the last two decades suggests that the women are likely to continue wearing the pants.

Indeed, it's good that there are people up north who understand some elements of the market, because they will be needed as a foundation if the regime collapses and the DPRK becomes part of a unified Korea or, God help us, a Cháoxiān Autonomous Prefecture.