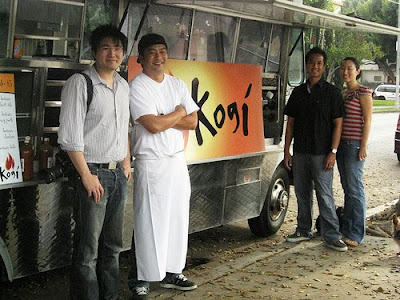 Okay, now I really need to make a point of trying this out the next time I'm in The OC*, although the hype and anticipation could leave me disappointed.


Food & Wine magazine cited Roy Choi and nine other cooks in their 20s to 30s in its annual list of best up-and-coming chefs.

Choi, who was born in Seoul, has built a loyal following in Los Angeles with his mash-up of Mexican and American street food with Korean flavors.

Food lovers can find his Kogi BBQ trucks via Twitter, the social networking tool that other food trucks rely on.

The 39-year-old Choi rolled out his food truck in late 2008 targeting young club-goers. His business has blossomed with his debut restaurant slated to open this week.

Before his food trucks, the classically-trained Choi had worked at Michelin-star Le Bernardin in New York.

The other nine chefs named by the magazine work in more traditional settings across the United States.

Well, that's cool. I like stories like this because it's an inspiration to a new generation of kyopo parents that their kids can be something other than doctors, engineers, and lawyers.