See the ROK in your Chevrolet? 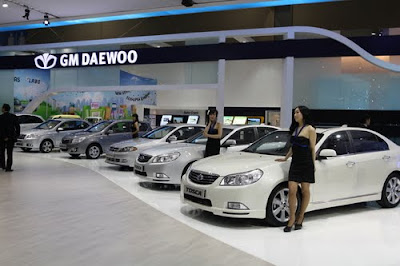 
US car giant General Motors will introduce its Chevrolet brand into South Korea next year in an effort to boost sales, the chief executive of the struggling local unit said Thursday.

"According to our survey, half of the (Korean) public is familiar with the brand," he was quoted as telling reporters at a motor show in the southern port of Busan.

GM Daewoo, acting as the US company's global mini car development centre, uses the Chevrolet brand overseas but its cars are sold under the Daewoo brand in South Korea.

GM Daewoo's union has opposed the idea of selling the Chevrolet brand in South Korea, claiming it would relegate the company to a subcontractor for the US company.

Indeed, there had been talk of turning all of Daewoo into Chevrolet, but there was opposition, especially from unions, and you don't want to piss off the unions, not in Korea.

Plus, basically, if the Korean automaker remains as GM Daewoo, the narrative is that Daewoo is saving General Motors, but if Daewoo vehicles were to be branded as Chevrolet, as is done elsewhere, the number-three Korean automaker might be seen as just a subsidiary of the American car company.

Of course, the rebranding would have the added effect (maybe) of undermining "the big lie" whereby anti-KORUS FTA types claim that Korea sells oh-so many cars in America (by counting Georgia- and Alabama-made Kia and Hyundai vehicles as Korean) but America sells so few (by counting Korea-made GM vehicles as Korean also). If, say, half of all Daewoos become Chevrolets, it will sound even more ridiculous to make such a pitch.