Steve, a commenter at The Grand Narrative, mentioned an article in the Joongang Ilbo I had missed about so-called "sex volunteers." These are people who volunteer to have sex with disabled people who might otherwise have no sexual outlet:


While director Cho Kyeong-duk was studying in Japan in 2004, he came across a nonfiction book with a provocative title: “Sex Volunteer,” by Kaori Kawai. It was based on two years of interviews with physically disabled people in countries from Japan to the Netherlands, about their sex lives and the group of people who, as the title implies, volunteer to sleep with them.

It reminded me of something I had read or heard in English a few years ago, about a man in Japan who is paid to take women's virginity. The women who use his service are largely thirty-something women or older who just never ended up having sex for one reason or another: A typical case would be a person who was saving it for the right person who never came along, and now at this "advanced" age, the virginity has become a burden that might turn off someone they would rather not scare away.

The JAD article immediately reminded me of a very minor character in the movie Fight Club. Though she's not "disabled," the woman dying of cancer tells her support group (attended by Ed Norton's and Helena Bonham-Carter's characters) that now all she wants to do is get laid and she makes an offer for anyone who will listen. Finally, she's removed from the podium.

While it might be a throwaway scene in a pop film, it's a real issue for a lot of people. Just because you're in a wheelchair or bed-ridden doesn't mean your libido shuts off. In public health and medical sociology, elder care is a major topic, and one key element is that your physical needs continue, a point driven home to me as I have two elderly relatives who are in nursing care facilities who are as randy as ever, but with no sexual outlet. In fact, it is their lack of sexual expression that leads to their sometimes inappropriate behavior in the form of ill-timed remarks that are really an expression of their horniness.

And who can blame them? It's not their fault they are paralyzed or have Alzheimer's... or were in an accident or have cerebral palsy or whatever. It's society at large that wishes they weren't so inconvenient to have around, shovels them off into facilities where they won't be so prominently visible, and then complains and gets grossed out when these people turn out to be people.

Okay, rant off. The JAD article actually gets into a movie about these so-called "sex volunteers":


Using a fake documentary format, the 123-minute film tracks the story of three people - college student Ye-ri, cerebral palsy sufferer Chun-kil and a priest — who are brought up on prostitution charges. Ye-ri said she was not paid to have sex with Chun-kil nor was she his girlfriend, instead calling their relationship volunteer work.

As the film unfolds, a female reporter interviews groups of people like the ones Cho met, from a priest who hands out sex aids to the physically challenged to a man who secretly operates a group of sex volunteers online.

Asked to explain where the boundary between fiction and nonfiction falls in the film, Cho said, “I added two characters: the priest and Ye-ri’s mother [who helps prostitutes leave brothels]. Except for those two characters, the film is based on truth.”

Cho has “no idea” how many real sex volunteers there are in Korea. “I just talked to a few people, and they don’t represent the whole sex volunteer community,” he said.

Apparently the film is getting some recognition:

Still, the project has met with a mixed response among activists for the disabled here. Koo Ja-yoon, a former counselor at the Web site Pureun Ausung for the Disabled, said Cho’s film might spread the misconception that sex volunteers are common, which is not true.

Well, when you deliberately choose a salacious title, you shouldn't be surprised when people respond primarily to that.

I'll try to look for this film. I'm curious how it ultimately depicts the disabled, with whom Mr Cho says he spent considerable time in order to research this topic. Movies like Oasis sometimes do a good job of humanizing those on what society has deemed the fringe, but when non-disabled are playing the disabled parts, it's easy to get into caricature or other forms of misrepresentation. 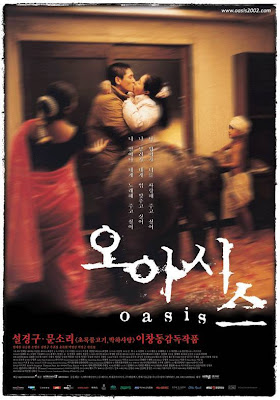