A hub of hosting and mecca of meetings

It just made me laugh this morning when I saw this news... here we have this very serious meeting of world leaders and their deputies converging on Washington to discuss nuclear security around the world, the biggest such gathering, we are told, since World War II and the formation of the United Nations. And what Korea-related news comes out of it? Wait for it... Wait for it... Korea will host the next one!


US President Barack Obama on Tuesday announced that South Korea would host the next nuclear security summit in 2012, in an implied rebuke to North Korea over its nuclear defiance.

President Lee Myung-Bak said that South Korea, which will likely see the award of the meeting as a diplomatic coup, would do its best "to make this summit a success."

That last paragraph... do you think? Seriously, though I see no problem with Korea giving the smug Swiss and bothersome Belgians a run for their money when it comes to diplomatic assemblies. And with that title, I'm poking just as much fun at the folks in the K-blog who get their panties in a bunch every time they see "hub" or "mecca" written somewhere.

UPDATE:
This is also being carried by AP, Yonhap, and the Joongang Daily, among others. 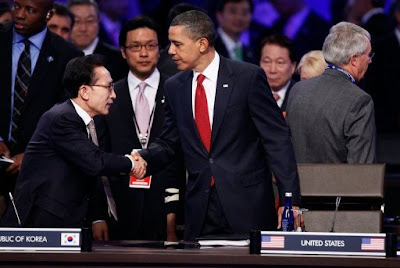 [above: After being moved to the adults' table, President Lee thanked President Obama for helping make South Korea the hub of hubbery. He also asked Obama to let the Korus FTA out of its locker.]