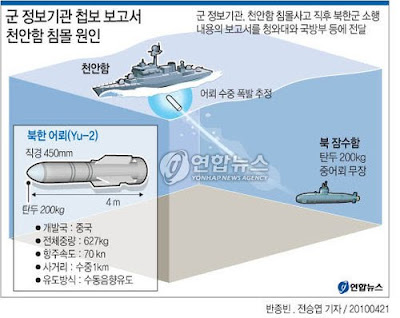 That's the news from Seoul, according to Reuters and Bloomberg, which cite a Yonhap report I couldn't find in English [UPDATE: Yonhap now has it in English].

From the Reuters article:


South Korea's military believes a torpedo fired from a North Korean submarine sank its navy ship last month, based on intelligence gathered jointly with the United States, a news report said on Thursday.

The Yonhap news report appears to be the clearest sign yet that Seoul blames Pyongyang for what would be one of the deadliest incidents between the rivals since the end of the 1950-53 Korean War. It puts more political pressure on President Lee Myung-bak, but analysts do not see it triggering a war.

The military's intelligence arm sent the report of "certain" North Korean involvement to the presidential Blue House soon after the incident, Yonhap quoted a high-ranking military source as saying. ...

"North Korean submarines are all armed with heavy torpedoes with 200 kg (441 lb) warheads," the military source was quoted as saying by Yonhap. "It is the military intelligence's assessment that the North attacked with a heavy torpedo.

A tearful President Lee Myungbak reminded everyone of the nation's loss, so it's clear something will be done (I mean, if you're going to hope everyone calms down so you won't have to deal with this, then you don't read off the names of each of the dead on national television).

At any rate, this is still not the final word, which would be something like the Blue House signing off on a Defense Ministry report that makes use of this conclusion by the intelligence group (which may itself fall under criticism for reaching this conclusion so quickly after failing to deal with the threat). So don't expect fireworks just yet.

And for reminders of actions short of full-blown war, please check out the reader discussion three weeks ago or Joshua Stanton's (or One Free Korea) must-read post on how to respond without causing a full-blown war. GI Korea at ROK Drop also had a good discussion.