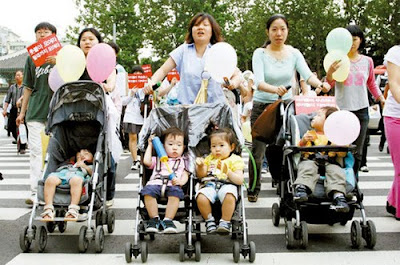 John Glionna of the Los Angeles Times has a piece on how some of South Korea's ajumma are tired of the negative stereotype so many have of them (including not just a few kyopo and other foreigners):


Kim Yong-sook is fed up and she's not going to take it anymore.

She's weary of women between the ages of 30 and 60 being ridiculed as selfish and unstylish — bossy, gossiping magpies with bad perms who pinch pennies and hog seats on the subway.

They're known as ajumma, a word long applied to married women with children but which in recent years has taken on a pejorative connotation that irks Kim.

Among many South Koreans, it's now often used to conjure an image of homemakers who disdain full-time jobs to while away afternoons on park benches, in coffee shops and at social clubs, bragging about their children and, if they've got the money, go on shopping sprees.

At 58, Kim has empathy for her fellow ajumma, who she insists have too long been misunderstood and ridiculed. Ajumma are not deadbeats, cracks in Korea's economic engine.

"Actually, we're running the nation," says the mother of one, a son. "We've got one foot in the house and one foot in society."

To be fair, like any group, there are almost indubitably some bad apples in the bunch, and if you don't like the stereotypes thrust on your group, the best first step is for you to be the better person you want to be seen as. Most of the ajumma I personally know are actually pretty good people, to be honest. I don't like some of the greed with which some of them make their life decisions, but in the aggregate I think they do more good than harm, much more.

Email ThisBlogThis!Share to TwitterShare to FacebookShare to Pinterest
Labels: ajumma