Normally I wouldn't be writing a post on a cartoon that appeared in the media over a year ago, but since the Russians are coming to get Monsieur Stephane Peray, the is-he-or-isn't-he syndicated political cartoonist at the Korea Times (see here), I thought I'd share part of a recent exchange specifically about one of the cartoons that had some in the K-blogs roundly criticizing him, the one right below. 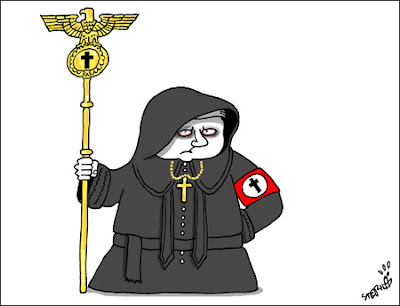 I was wondering if you could shed light on one of cartoons the K-blogopshere found particularly controversial last year.

It was dicussed at Korea Sparkle.

If the cartoon is about Williamson at all, you should also note that the Korea Times entitled it "The Dark Pope," which would have muddled your intent. Perhaps that is something to take up with them.


Anyway , the Dark pope was because he rehabilited that holocaust –denier cardinal ( yes 3rd option )
I pushed a little bit the envelop on this but the Swastika appears nowhere if you look carefully not the word Nazi have been mentionned ( you mentionned it ) . That’s the problem with suggesting things, it gives a certain room for interpretation . Yes I exaggerated a bit on this one but he’s not a nazi officer – he’s a vilain from Starwars but sometimes it’s fun to exaggerate and push the envelop. Let’s not forget that the Vatican didn’t move one inch during the Holocaust. Yes this pope was in the Hitler youth and I agree it ‘s not his fault . But we can remind the catholic church their fair share of darkness ( and that is what this carton is about ) . You have to learn to see real statement from pure exaggeration ( it’s all mixed in a cartoon )

Fair enough. I can see that being a legitimate statement about a contentious news story. And despite what appears to look an awful lot like a Nazi Parteiadler (party eagle) and an armband reminiscent of those worn by the Nazis, the caricatured drawing itself contains no swastikas and indeed the figure looks more like Emperor Palpatine from the Star Wars saga. Though nudged along, we the viewers are inferring the character is a Nazi. But that's sort of the point, isn't it?

Anyway, my purpose in bringing this up is to point out, based on a direct discussion with the cartoonist, that there was a point to the cartoon, and that point, though controversial or even "insensitive" (as Hub of Sparkle wrote), is perhaps the legitimate sphere of a political cartoonist.

Email ThisBlogThis!Share to TwitterShare to FacebookShare to Pinterest
Labels: cartoons