And Asia's hopes are dashed 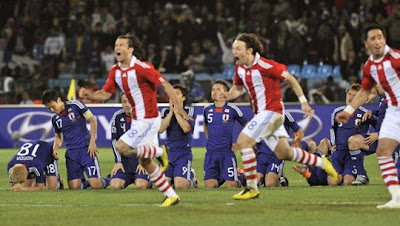 I didn't get a chance to view this match, since I was in line at the at&t store to get an iPhone 4 (more on that later, but a preview is that you suckers in Korea who lapped up the 3Gs like it was the golden turds of Steve Jobs himself are going to be kicking yourselves — kicking yourselves — for not having waited just a few more months for the iP4).

And speaking of kicks:


Japan crashed out of the World Cup finals in heartbreaking fashion on Tuesday after a 5-3 penalty shootout defeat to Paraguay in the second round.

Yuichi Komano missed Japan's third spot kick and Oscar Carodozo buried the decisive penalty to give the South Americans victory after a goalless 120 minutes and deny Japan a first ever place in the quarterfinals.

And with that, all three of my favorite teams are out of the World Cup. I guess I really will start rooting for Ghana. I like their chocolate.

Email ThisBlogThis!Share to TwitterShare to FacebookShare to Pinterest
Labels: 2010', Are you ready for some futbol?