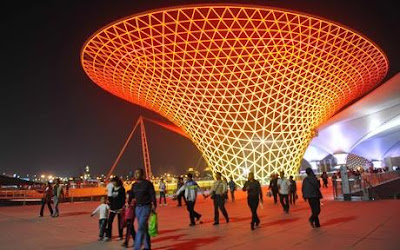 PBS's "Newshour" has had several China-related stories this week. The first two were health-related, dealing with smoking and obesity in China (more on them in a future Public Health Reader). Yesterday's dealt with the Shanghai Expo. It's a good read or a good watch (the non-embeddable video can be seen at the link). Some thoughts...

Mingzheng Shi of the Shanghai campus of New York University talks about the historic narrative learned by Chinese and how that plays a role in China-sponsored events like the Shanghai Expo or the Beijing Olympics:


People here love great theme, great power. Well, there were great powers in the past. As a historian, I know China was great in the 18th... 18th century. And then something happened. The West came to dominate. And then they had a... what they call 150 years of humiliation.

And that humiliation is still on people's mind. And now they talk about reviving China, making China great again, by launching, for example, events like the Expo or the Olympics.

And that attitude right there is Exhibit A why South Korean nationalism doesn't really scare me all that much but Chinese nationalism does (and right-wing Japanese nationalism, to some extent). [Indeed, while there is a segment of the Korean population that blames the United States for dividing Korea and then causing untold death and mayhem not long afterward, the mainstream and official views are more balanced and favorable to the US on the whole. Contrast that with the official view of China toward the West, where the US and its South Korean puppets are still (?) said to be the ones who started the Korean War.]

The sentiment Shi describes also informs why Chinese might reaction this way to South Koreans or Japanese getting uppity about human rights issues involving China. [Just as granting Seoul the 1988 Olympiad became a catalyst for democratic reforms, the IOC and others thought that giving Beijing the 2008 Summer Olympics would lead to an expansion of human rights in China, but the opposite turned out to be true.]

Anyway, the "Newshour" piece goes on to explain that the US wasn't really enthusiastic about hosting a pavilion, but then they recognized that a golden opportunity was being missed, so Secretary of State Hillary Clinton twisted some corporate arms and got something nice put together.

Indeed, this segment underscores the very problem that exists when it comes with dealing with China (e.g., like when dealing with North Korea): There are too many people afraid of ruining the sweetheart deals they have shipping things to or from the PRC.

I did have one other thought about the Expo and its relation to international politics. The sinking of the Chonan occurred in the final weeks of preparation for this major event, which was even more expensive than the Olympics. Could Pyongyang have timed their attack for a period when they knew that China would be less willing to be confrontational, something they may have learned from the Battle of Yŏnp'yŏng while the 2002 World Cup was going on?

Apologies for the disjointed nature of this post. Some of my best thoughts are disjointed. Perhaps it's a sign I'm not ready for Marmot's Hole prime time.

[Note: The picture way up top was "borrowed" from The Telegraph.]