And speaking of addictions... 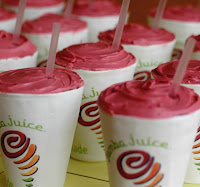 ... Jamba Juice is coming to Korea. According to the AP, it plans to open two hundred stores over the next ten years:


Jamba agreed to develop the locations with Paris Croissant, an affiliate of the SPC Group, which has 4,500 retail locations in South Korea across several brands, including Paris Baguette.

I think I have a Paris Croissant near my apartment, but it could be Paris Baguette. I always get the two mixed up (and don't tell me one's bigger than the other).

Anyway, I've tried Jamba Juice exactly once. I liked it okay, but as a grad student on a budget, it was either JJ or Coffee Bean, and I think it's no secret where my loyalty lies.

I don't think places like Red Mango will be too hurt by Jamba Juice's sudden entry [edit: Whoops, that didn't come out right], mostly because their primary product is different enough (sit-down frozen yogurt versus on-the-go energy drinks as meals), but Smoothie King may be dethroned. Which is too bad, because they used to have that buck-naked girl (i.e., young woman) in their  advert posters.