Why on Earth would Kim Jong-il or an underling torpedo the Chonan?

Well, according to the Los Angeles Times, ...


Whether or not Kim Jong Il personally ordered the torpedo attack that sank a South Korean warship, the ensuing atmosphere of crisis has given the ailing dictator an opportunity to distract a population that might otherwise be complaining that they're eating weeds instead of rice.

The furor over the March 26 sinking of the Cheonan, in which 46 sailors were killed, has given Kim an opening to stage mass rallies and conduct air defense drills in a "wag the dog" strategy.

"This will distract people from their troubles," said Cho Myong-chol, a Pyongyang-born economist and son of a former North Korean minister. Cho, who now lives in Seoul, doesn't believe that Kim was intimately involved in the attack.

Of course, none of this is new. A lot of us have been saying for some time that the tension over the sinking would be an excellent way to distract a public that is increasingly angry over their loss of savings and livelihood due to the Great Currency Obliteration of 2009. 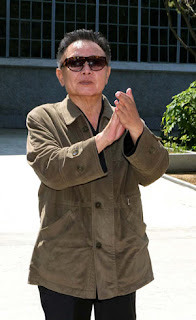 Of course, a full-blown confrontation in the Yellow Sea was probably the response they expected or even wanted, but even all this "we're going to take this to the United Nations" stuff is enough for the Pyongyang regime to put everyone on high alert. Mission accomplished.