Seeking revenge for Athens's economic woes having sent the KRW into the crapper and threatening the ROK's economic recovery, South Korea beats Greece, 2-0, in its first 2010 World Cup match 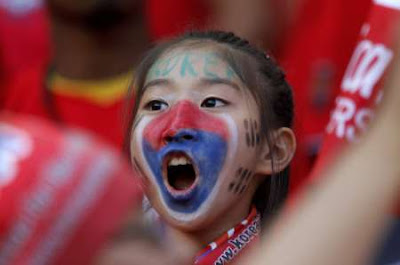 Manchester United midfielder Park Ji-Sung capitalised on an error by defender Avraam Papadopoulos to secure the points with the second goal after 52 minutes.

After the match, Huh, who became the first South Korean-born coach to lead his country to a World Cup finals victory, said: "The first game of any tournament is difficult, but my players really played very well, so I am very grateful.

"But we are just at the beginning now. We have more matches to play and we have to prepare for those games just as well."

Greece boss Otto Rehhagel admitted that his team had been second-best on the day.

He said: "We were unlucky in a couple of situations towards the end of the match, but it was a deserved victory for South Korea."

Next stop: Argentina on June 17.

I have nothing to add except that I was unable to watch because of (a) the late hour and (b) the utter lack of a television at this moment in my efforts to vacate Oahu.

[photo above: I chose this fan to put up on my site because she spelled Korea with a k.]

Email ThisBlogThis!Share to TwitterShare to FacebookShare to Pinterest
Labels: 2010 World Cup, Are you ready for some futbol?, Greece, soccer, South Korea