A blast from the four-years-ago past:
World Cup 2006 posts 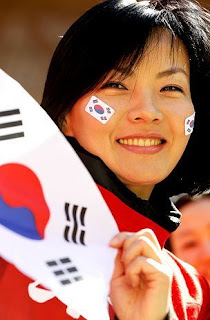 I'm risking that my jinx will sink Korea Republic, but I'm watching the Nigeria-South Korea match — and turned it on just in time to see the Taeguk Warriors tie it up 1-1. A draw will put South Korea in the next round for the first time ever outside of South Korea.

In the meantime, while glancing up from what has been amateurish play at times (seriously, AYSO champions do better than some of this), I've decided to take a somnambulistic stroll down memory lane and link to my 2006 World Cup posts (I was not blogging in 2002, so I don't have any of those).
Anyway, I looked up from my MacBook Pro just in time to see South Korea take the lead, 2-1. The announcers are talking as if it's over, which seems a tad premature to me.

By the way, if you haven't seen it, right here's a very handy calendar of the various matches and the scores of those already played. You can look things up by country, date, or location.