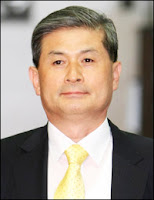 And right on cue, he's baaaaaack:


Korea's discredited embryologist Hwang Woo-suk is looking to resume research on cloned human embryos here if he gets the green light from the government.

Professor Hyun Sang-hwan at Chungbuk National University, who acts as a de facto spokesman for Hwang, said Friday that his team will ask for government permission to restart this branch of cloning research.

This is my thinking: If any of his supposed triumphs was in fact valid (and I believe Snuppy is still considered legit), then I say we let him go back to work again. After all, even if he fudged data in the face of overwhelming pressure, he may have some skills that could help the greater good.

And if he is allowed to conduct research again, he will be the must scrutinized scrutinee in the history of scrutinization, so I'm not too worried about him cloning another scandal.