NYT on "the Chonan effect"

It appears that North Korea's murderous actions in the Yellow Sea and South Korean President Lee's cool-headed but stern reaction are earning support for the latter in the upcoming elections.


The sinking of the South Korean warship Cheonan, apparently by a North Korean torpedo, has provoked an international crisis that has embroiled big powers like the United States and China. But here in South Korea, it has had another effect: buoying the country’s once embattled conservative, pro-American president, Lee Myung-bak.

Soon after taking office two years ago, Mr. Lee appeared at risk of losing public support, as he faced mass demonstrations on the streets of Seoul against the import of United States beef. Now, political experts are talking of the “Cheonan effect,” as polls show more than half of voters approve of the president and his tougher line toward the North.

Nowhere is the current upwelling of popular support more apparent than in local elections to be held across South Korea on Wednesday. President Lee’s Grand National Party, whose candidates once faced tight races in some districts, now appears poised to sweep the most important races, including hotly contested mayoral seats in Seoul and the nearby port of Incheon.

Some will no doubt see this as a sure sign that the sinking of the Chonan was a false flag operation (this is hinted at in a BBC piece). That is, that Seoul itself sank its own vessel in order to whip up support for the ruling party and/or against North Korea. They're standing cause and effect on its head, of course: President Lee's adept response is the reason for the rise in popularity; a hoped-for rise in popularity is not the cause of the attack.

Let's not forget that President Bush enjoyed a meteoric rise in popularity right after 9/11 (heck, the whole country did). Oh, wait, come to think of it, that would just put the Southers™ in the same ideological boat as the Truthers.

Let's try a different one. A beleaguered President Clinton enjoyed a rise in popularity when he was impeached — many felt unfairly or unjustifiably — for the Monica Lewinsky affair, and his party experienced an unusual gain in overall seats during the 1998 midterm elections.

President Lee did not want this nor ask for it, and while it's appropriate in a democracy to ask tough questions, it's sick to insist in the face of so much evidence to the contrary that someone in the ROK government deliberately killed these dozens of sailors for some hope for political gain in local elections. 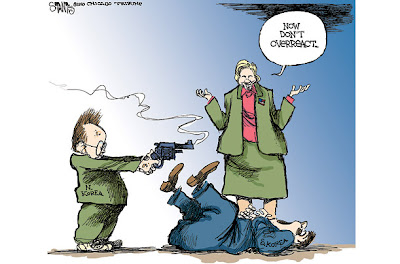 I am not saying it's not possible, only that the idea becomes absurd the more it is analyzed. Setting all the physical evidence aside for a moment, the timing of the sinking (in March) isn't quite proximal enough for June elections, especially since the president's slow and meticulous response carried the risk of alienating and angering the population.

If one really wants to look for a possible ROK-engineered false flag operation in order to affect an election, check out the 1987 downing of the Korean Air flight 858 just days before South Korea's first democratically run direct presidential elections, supposedly by a spy named Kim Hyŏnhŭi ("Mayumi"). That story has major holes, but it, too, is probably true.