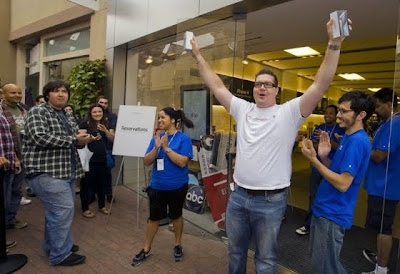 This guy, who waited in line outside the Irvine Spectrum Apple Store since yesterday afternoon to be the first in Orange County to get an iPhone 4, isn't doing much to dispel the notion that Apple fanboys aren't overweight jobless losers who live parasitically off their parents. If OC homes had basements, I have no doubt he'd reside in his parents', using the lightsaber app to reenact scenes from the first Star Wars trilogy.

And the several health-challenged gentlemen in plaid flannel shirts aren't doing much for Apple's image either. Is it possible they've actually been waiting in line since whatever year it was that grunge clothing was popular?

The iPhone 4 launch is not going completely smoothly. There have been reports that the iPhone 4's antenna design means the device apparently doesn't make phone calls. Reporters tried to verify this with Mr First and other early patrons, but it turned out none of them had anybody they could actually call. How sad to not be able to fill a Fav 5. I guess that kind of challenge is why they're willing to go with AT&T.
Now what I'd like to know is why Mr First has two when there are loads of people waiting to just get one. Is he going to videoconference himself? Or is Apple imposing a rule, à la airlines, requiring people with fat fingers to purchase more than one device? (Seriously, at the OC Register link above there's a picture of Mr First displaying one of the devices with his giant mitts, and I swear it looks like he's holding onto an iPhone 4 commemorative stamp.)
I'm not so sure Mr First, who has been sitting outside in the hot sun since yesterday afternoon without basic comforts like running water, should be airing his underarms so brazenly. Really, they should impose a "no victorious arm waving" rule. At least he had an adequate supply of food and Jamba Juice; reports that Mr First or some other corpulent first adopter had devoured one of the smaller Apple Geniuses were dispelled when she was found cowering under the restroom sink muttering something about geek overload. 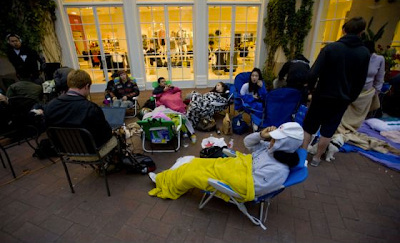 There was a bit of embarrassment for the local media when the above picture, reported to be people waiting to get their hands on an iPhone 4, turned out to just be Orange County's upscale, fashionable homeless.

Anyway, the line at OC's several Apple Stores have been getting longer as the day moves on. Above is a picture of people queuing up outside the Irvine Spectrum Apple Store this morning. The line was a bit shorter at the shop in the Great Rift Valley Plaza.