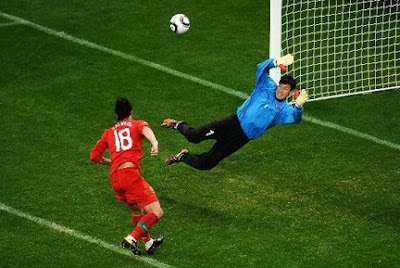 A scoreless performance in soccer is embarrassing, but not all the uncommon. A 7-0 shutout is utterly humiliating, but that's what went down for North Korea when they faced Portugal in the World Cup.

North Korea had already lost to Brazil, but at a respectable score of 2-1. Surely the Pyongyang regime must have figured there was a good chance — a probability even — that Korea DPR would lose to the Portuguese, so the question is: Why would they choose to air it live anyway?


North Korean state television aired full live coverage of the team's 7-0 World Cup loss to Portugal on Monday in what is believed to be a first for a North Korean football game taking place abroad.

"The Portuguese won the game and now have four points," a commentator said when the match concluded. "We are ending our live broadcast now."

And that's that. Or is it? Just what is behind this... this... well, openness. The powers-that-be have admitted mismanagement of the economy and are apparently allowing markets to open again, and now this.

Think about it: the DPRK government thrives on control of information and perceived infallibility is the coin of the realm. Yet someone decided to allow the live broadcast of a match that the North Koreans would likely lose. What does this mean?

As we get reports that Kim Jong-il may be out of the loop and power is already being passed to his son, one wonders if we might actually be seeing the first glimmers of some sort of North Korean-style perestroika. Is someone up there a Gorbachev in wolf's clothing?

And that's something to consider as we ponder the more immediate results of this loss. Is the DPRK's national team in danger? Might they consider mass defections to avoid censure, imprisonment, or worse?  Might this humiliating defeat have laid bare the inefficacy of the nation's rulers, adding to the general feeling of disgruntlement toward the regime?