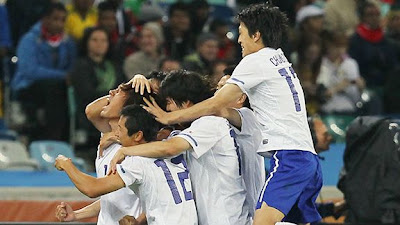 It was quite exciting, though a bit amateurish, as I mentioned here. But South Korea has managed to edge into the Round of Sixteen with one win, one draw, and one loss. They join Argentina, to whom they lost badly, in leaving Group B. Here's ESPN's coverage of the match.

After a half dozen World Cup appearances since 1954, it is the first time for Korea Republic to advance beyond the group round except that fabled time when the World Cup was played on South Korean soil in 2002.

It was a nice lunchtime match here in Pacific Daylight Time, but it's got to be the middle of the night for fans back in South Korea.

Did anyone go out and watch? Did you stay up late or get up early? Are people going to work? Did people pull down their pants? Was it a wonderful evening of theater and picking up after yourselves?