More on the vanquished of Victor Valley 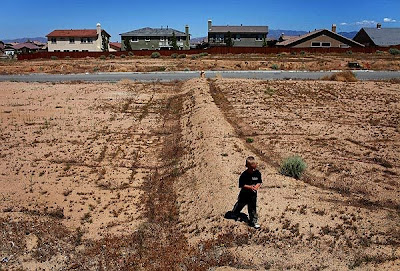 A year ago I wrote perfectly good new homes in the Victorville area, the High Desert region of Southern California, that were being razed due to financial problems and a lack of creative solutions.

This story in the Los Angeles Times takes a further look at the people who had bought homes hot, arid region, where they dreamed of being able to find large but affordable homes in low-crime areas, only to see their hopes dashed:


About 300,000 people call this region home. Baked in the summer, frozen in winter, it is scoured by winds that sweep down the mountains — and yet they come, drawn by what they can't find elsewhere in Southern California: the promise of large and affordable houses in clean and safe neighborhoods. ...

Then the housing bubble burst, and the recession kicked in.

Construction stopped when a builder filed for bankruptcy in April 2008, leaving nearly 100 graded lots bare and six Craftsman-style houses ready for roofing and stuccoing that never happened. A sign advertising home sites stayed up even after the phone number was reassigned.

In the last four years, according to the San Bernardino County assessor's office, 373 of the 941 single-family homes in Mission Crest — nearly 40% — have been foreclosed on. Thirty-five have gone through foreclosure more than once. Properties that once sold for nearly $400,000 are worth less than $200,000.

It's the kind of story that angers me, because in many ways it's about people who have been screwed over twice by the same people: they had to move out that way (and if they do commute to Los Angeles County, Orange County, or the cities of the Inland Empire, it's a very long drive twice a day through Cajon Pass) because real estate developers priced them out of the market down in the populated coastal areas; and then when they finally found something they could afford, miscalculations by the monied mavens sent their new investment (and its environs) into a death spiral.