Koreas at the World Cup 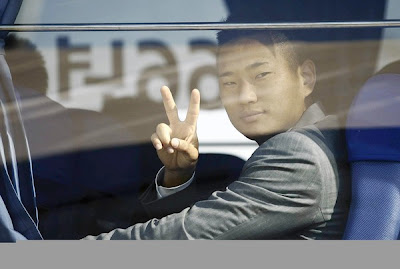 I'm doing a bit of traveling for the next week or so, so expect light posting. But there have been a few interesting reads in the media related to both Koreas and the World Cup. This first is a Los Angeles Times story by Barbara Demick on North Korea's star (who was actually raised in Japan), Jong Tae-se:


Jong Tae-se is a 26-year-old publicity hound with his own blog, where he strikes a sultry bare-chested pose. He has appeared in television commercials. He drives a silver Hummer and likes to dress like hip-hop artist Tupac Shakur. When he goes on the road, he travels with a laptop, iPod and sometimes a Nintendo DS and a Sony PlayStation Portable.

Jong is the star striker of North Korea's 2010 World Cup team. That makes him at this particular moment the most recognizable living North Korean, with the possible exception of the Dear Leader himself, Kim Jong Il.

And like Kim Jong-il, it sounds like Mr Jong enjoys a helluva lot more freedom than the rest of his "countrymen."

The second is about what happened to result in so many empty seats in the Korea Republic section at the ROK-versus-Greece match:


FIFA is investigating why around 8,000 ticket-holders failed to turn up for Sunday's match between South Korea and Greece in Port Elizabeth. There were banks of empty seats all around the ground, and commentators lamented that such a well-built stadium was not filled to capacity.

There were plenty of empty seats in the game between South Korea and Greece
A FIFA spokesman said that only 31,513 people were in the 42,486 capacity Nelson Mandela Bay Stadium, even though almost 40,000 tickets had been pre-sold. "It looked like a lot of people did not show up" he said. "We are investigating. We have no clue what happened - tickets had been issued." It is understood most of the no-shows were tickets sold to companies. "We are investigating who those companies are, why those tickets were not distributed to their owners or why those owners didn't make it to the stadiums," the spokesman added. FIFA cut prices for group sale tickets to be allocated among local businesses and public service workers and paid for buses to bring fans to the ground.

I just hope it doesn't turn out that some eight thousand South Korea tourists were kidnapped. Or that they all went to South America instead.

Email ThisBlogThis!Share to TwitterShare to FacebookShare to Pinterest
Labels: 2010 World Cup, Are you ready for some futbol?