The Arizona immigration law that requires everyone to carry proof that they are in the US legally has a lot of people up in arms because of fears that it will result in racial profiling, with Hispanics (and Asians) in particular being targeted.

As this article in the Los Angeles Times reminds us about an incident I recall from the late 1990s, these fears may be well founded:


In late July 1997, police officers fanned out across this Phoenix suburb searching for illegal immigrants. Working side by side with Border Patrol agents, police demanded proof of citizenship from children walking home from school, grandmothers shopping at the market and employees driving to work. 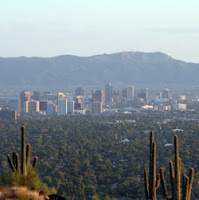 At the end of what became known as the Chandler Roundup, 432 illegal immigrants had been arrested and deported. But during those five days, local police and federal officers also detained dozens of U.S. citizens and legal residents — often stopping them because they spoke Spanish or looked Mexican.

Now, as Arizona prepares to enact SB 1070, the controversial new immigration law, many of Chandler's Latino residents say they are reminded of those terrifying days — and fearful of a repeat of the past.

"SB 1070 just brought home the point: If you are Hispanic or Mexican, you are just not wanted in Arizona," said Joe Garcia, 65, a U.S. citizen who owned a video store in downtown Chandler and helped form a civil rights coalition to demand answers after the roundup.

The state attorney general later determined that authorities had engaged in racial profiling and violated the rights of residents.

I think I've stated before that if this law is enforced across the board — meaning that all gringos are also checked for their documents every time they are stopped for some lawful purpose and they are also detained or fined if they don't have their paperwork — then I don't have much of a problem with it.

But I'm not so confident that will happen. I'm also not so confident that excuses won't be made to "legally" stop someone for some other purpose when the law enforcement representative feels the person might be illegal based on their apparent ethnic background and they are merely looking for a pretext with which to check for documents under SB 1070.