With a few exceptions, such as in India, outsourcing companies in developing nations tend to be small, with fewer than 100 employees, said Paul Tija, a Rotterdam-based consultant on offshoring and outsourcing. But North Korea already has several outsourcers with more then 1,000 employees.

"The government is putting an emphasis on building the IT industry," he said. "The availability of staff is quite large."

At present, the country's outsourcers appear to be targeting several niche areas, including computer animation, data input and software design for mobile phones. U.S. government restrictions prevent American companies from working with North Korean companies, but most other nations don't have such restrictions.

The path to IT modernization began in the 1990s but was cemented in the early 2000s when Kim Jong Il, the de-facto leader of the country, declared people who couldn't use computers to be one of the three fools of the 21st century. (The others, he said, are smokers and those ignorant of music.)

Boy would I like to know the exact Korean wording of that expression. It has too many elements (those who can't use computers, smokers, those ignorant of music, twenty-first, century, and fool) to be a sajasŏng•ŏ, a four-character saying.

Anyway, is this a good thing or a bad thing? On the one hand, such international "trade" makes it harder to get that pesky Pyongyang regime to collapse, and it also creates the potential for mischief-makers in the DPRK. On the other hand, however, it helps develop a market that could come in handy if a post-KJI North Korea — whether independent or unified with the South — wants to get back on its feet more quickly. 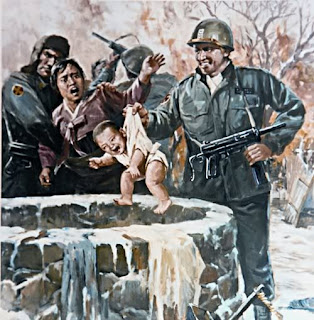 [left: In hindsight, it was probably this submission that lost the North Korean Animators Guild the "Simpsons" artwork gig.]