The Tokyo part was easy. The Beijing part was almost certainly not (if true).


Mr Yu had no criticisms to make of China for failing to condemn North Korea publicly for the sinking of the Cheonan.

On the contrary, he felt that China had been privately helpful and understanding during the three-way summit with South Korea and Japan, which ended on Sunday.

South Korea is hoping to make the regime in Pyongyang pay a heavy price for its actions.

It is invoking UN resolution 1695, passed in 2006, which makes it possible to introduce economic sanctions against North Korea for breaching its international obligations.

The government in Seoul wants all inflows of money to North Korea to be stopped.

If China, which has so far delayed announcing its own findings on the sinking of the Cheonan, does take part in the sanctions, it could make life even harder for President Kim Jong-il's regime.

If, if, if. And if pigs flew out my butt, I could open a deli. Or however that colorful Texpression goes.

Anyway, I don't know if this is face-saving by a Lee regime which is angered and embarrassed that Beijing seems unwilling to call a spade a spade and acknowledge this act of war by Pyongyang, or if this is Beijing privately saying, "Okay, we get it. We'll help you do something about it, but we can't make a huge production out of it." 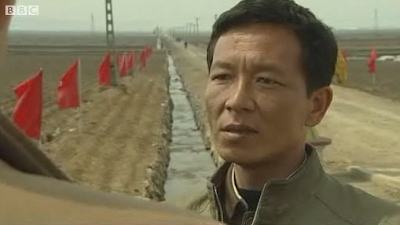 Meanwhile, the BBC also has a video of one of their reporters, Sue Lloyd-Roberts of Newsnight, on a trip to the North Korean countryside. It's an old story and a familiar situation to anyone who has paid attention to the parade of journalists who take jaunts around the DPRK under the watchful eye of a guide-cum-minder who only takes them to where they're supposed to go and only lets them say authorized things to whom they're supposed to talk with.

But still, it's fun listening to her address the obstinacy of her guide. The bugger flat out refuses to translate some of her questions to the farmers she's interviewing when, say, a truck with an EU logo on it shows up, obviously calling into question the much touted "self-reliance" of the DPRK.