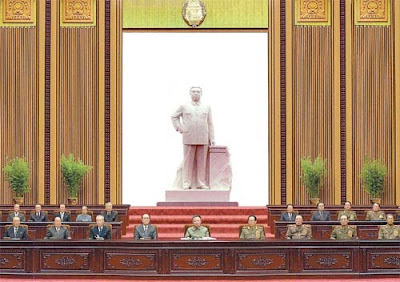 [UPDATE: the Los Angeles Times has the story here.]

Yonhap reports that the dynastic transition to a third generation of Kims took center stage, supported by some shuffling of the apparatchiki:

He was absent from the last session of the rubber-stamp Supreme People's Assembly on April 9. The official Korean Central News Agency said Jang Song-thaek, who heads a Workers' Party department, became a vice head of the National Defense Commission, the highest seat of power.

The promotion may suggest Kim, 68, is moving forward with efforts to transfer his power to his third son, Jong-un. The report added that Choe Yong-rim, chief secretary of the Pyongyang City Committee of the Workers' Party, also replaced Kim Yong-il, premier of the Cabinet.

Choe gave a speech at a mass rally on May 30, where as many as 100,000 people reportedly denounced South Korea and the United States for blaming Pyongyang for the sinking of a warship in March.

When Kim Jong-il shows up, it's serious. With the economy in the dumper, he's really going that extra mile to make sure his youngest kid has a job. His older son is being written off as a drunken gambler, I guess. 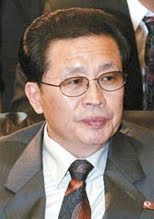 My suspicion, and I'm serious about this, is that brother-in-law Jang Song-thaek [right] has been hired by stroke-hobbled Kim Jong-il to play the role of taewon'gun (a kind of regent) to his son Kim Jong-un after the Dear Leader kicks the bucket or can no longer rule.

Naturally Jang himself would need to be in a lofty enough position to command the authority, loyalty, and power needed to do that, which is what I believe promotion to the vice head of the National Defense Commission provides him.

The palace intrigue is fascinating. We have oldest son Kim Jong-nam holed up in a Macau hotel insisting he has no interest in being leader of North Korea — perhaps to spare himself from assassination by those who might want to make sure that either (a) he won't block his younger brother's ascendency or (b) he won't try to come to power in a post-collapse North Korea whose disgruntled citizens long for the nostalgia of when they weren't economic slaves to the South Koreans who would then control their fate.

For his part, Jang is trying to ensure not only the continuation of the dynasty but also his own powerful position, riding the coattails of his nephew (?).

But what do we really know about any of these people? Kim Jong-il was all about securing power and then maintaining it, but in the wake of the Great Currency Obliteration of 2009 and the angry upheaval that resulted from that disaster (which they almost certainly know about), maybe the next generation/round of Changs or Kims might have a different idea. Am I naïve to hope that there is a Gorbachev among them? 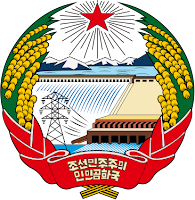 [right: Fun fact... the Supreme People's Assembly lifted its logo from the Washington State Department of Water & Power.]
on June 08, 2010