Well, since Japan is a whopping sixteen hours ahead of California with its dumb Pacific Daylight Time, Apple fans from Hokkaido to Kyushu are already getting their grubby little hands on the iPhone.


In Tokyo's trendy Harajuku neighborhood, more than 300 people lined up amid a festive atmosphere outside a shop for Softbank Corp., the iPhone's exclusive carrier in Japan. When the clock struck 8 a.m., the store opened as confetti fell from above and a curtain covering the windows and entrance came down to reveal a sign in Japanese that read: "This changes everything."

"You have new products with cars, TVs and games, but how often do you see this much passion with people getting in line days before," said Softbank Chief Executive Masayoshi Son at a ceremony marking the iPhone 4's launch. "This is not a product. This is a work of art."

Indeed, there's a very Japan-ish aesthetic to the iPhone, from the simple form masking high functionality to the cleanly cute appearance and the white thematics. It's almost Wii-like. 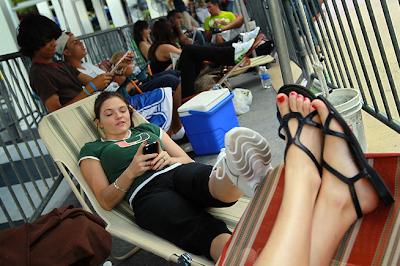 Anyway, I think I'd rather wait for the iPhone in Miami.

UPDATE:
Here's a link to a BBC story on people getting the phone in London. Despite some rumblings here and there about problems, the people who have actually bought one are raving about it.