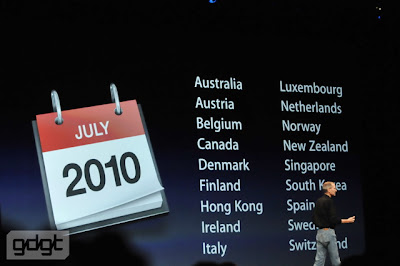 As promised, the South Korea release date is the big news for those back in the ROK. I like how Steve Jobs's head forms the o in Korea. I don't like how they alphabetize South Korea as if South is a part of the name, like South Africa, South Carolina, or South Dakota.

Anyhoo, Korea is not part of the first group (the US, UK, France, Germany, and Japan) that will start getting the iPhone 4 on June 24, but it is specifically listed as one of the G18 that gets it a few weeks later.

Apple and KT had to go through a bunch of hoops and hurdles to get the iPhone into the country in the first place, with the 3Gs being the high-end at the time. Since those hoops and hurdles — including establishing service and contracts — have already been passed, it will probably be a lot smoother for the iPhone 4 to enter the market.

Many of those patient users in Korea who finally got a 3Gs were rewarded with some very sweet deals that made the phone nearly free (by contrast, I paid $199 plus tax for mine in Hawaii), but they may be kicking themselves for not having waited a few months longer for the iPhone 4.

I'm not sure how long 3Gs users will have to go through their contract before they can buy a subsidized iPhone 4, but I suspect now is not the time. It's also not clear if iPhone 4 buyers will enjoy the same sweet deals that the 3Gs buyers did.

We'll have to see. All I'm doing is pointing out that the iPhone 4 is reportedly going to ship to South Korea next month.

Oh, and it has a Samsung chip inside (just like the iPad), so that's another Korea thing.

UPDATE (July 17, 2010):
Because they're waiting for ROK government approval, Steve Jobs announced that the iPhone 4 won't be released in South Korea during the second wave, as originally planned. Hopefully it won't be too much longer, but we're looking at least into August.

UPDATE 2 (September 5, 2010):
Korea Telecom (KT) has just announced a release date of Friday, September 10, for the release of the iPhone 4. We're going to hold them to that.