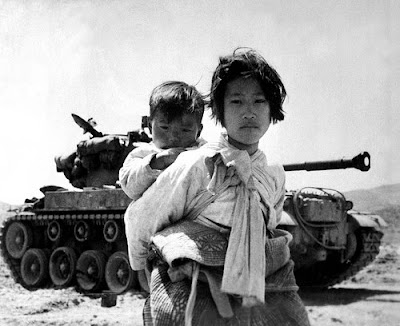 Over at One Free Korea, a commenter named Stephen Erickson alerted us to his essay on making a deal with China over North Korea, a grand bargain which boils down to "our side" giving away the store in exchange for questionable IOUs:


The deal would look like this. The Chinese would agree to support short-term punitive measures against North Korea, in order to give South Korea some satisfaction for the loss of its ship and crew members. But more importantly, China would quietly guarantee that no similar incident would happen again. China has the power to keep North Korea strictly in line, and would agree to do so. In return, the US would promise to withdraw its ground forces from SouthKorea in a year or two. After ten or so years of peace without incident, the US would withdraw all of its naval and air assets as well.

Removing US troops from South Korea would distance us from the Korean powder keg and itself help diffuse the situation. North Korea would no longer be able to use the American presence as justification for its belligerent actions. Nor would such actions be permitted by the Chinese because of the aforementioned agreement. Getting out of Korea would save precious dollars and US military forces needed elsewhere.

As I wrote at his site (awaiting moderation) and at OFK, Mr Erickson's essay is based on a series of inaccurate assumptions.

First and foremost, he fails to grasp the extreme positive brought about by the US military presence in South Korea. This role by the US in Korea is the single greatest stabilizer in the region, without which the types of events that played out prior to the US taking a strong and active role in Northeast Asia would likely replay (four major wars on or through Korea in the sixty years prior to 1953, and none in the nearly as long period since then). The concomitant corollary to this assumption is also incorrect: were war to erupt again, the US would likely find its way into that as well, eliminating any cost savings from removing the highly effective deterrent and, while removing any real influence on the part of the US to prevent the conflict.

His second faulty assumption is that China even could "guarantee that no similar incident would happen again" and that "China has the power to keep North Korea strictly in line." In fact, this ill-considered notion would be laughable if its consequences weren't so deadly serious. It assumes that North Korea has no other game plan in the absence of cash flow from Beijing, when in fact Pyongyang is quite adept at playing even players like Beijing and Moscow off each other. With Russia looking to stick it in the US's eye whenever they get a chance, it's clearer and clearer that we're still in a form of the Cold War, but just the sound is on MUTE. Pyongyang would simply return to its old game plan of looking to Moscow when it can't get what it wants from Beijing.

Pyongyang cheats at cards, and Mr Erickson's solution amounts to taking the cards away so they can't cheat no more, unaware they've also got mahjong, chess, Monopoly™, and Battleship™ from which to hornswoggle their opponents.

His third misconception, in reference to the idea that "North Korea would no longer be able to use the American presence as justification for its belligerent actions," is that North Korea needs any real justification at all for its belligerent actions. This is a country that routinely accused its three greatest donors of food — Seoul, Washington, and Tokyo — of trying to overthrow it... while they were accepting such food aid. The belligerence is not caused by the actions of North Korea's enemies; rather, North Korea talks up what enemies they are as a justification for its belligerence. The propaganda is for domestic consumption, and the population must hear all about an oppressive enemy in order to justify or explain away Pyongyang's tight grip and string of economic failures.

And his final fantasy, that "such actions [would not] be permitted by the Chinese because of the aforementioned agreement" is just as egregious. China cannot control Pyongyang, and when Pyongyang eventually behaves badly despite America's departure from South Korea, that fact would be quite obvious, as would China's own duplicity when it fails to follow this international agreement that might undermine its client state.

When I clicked on Mr Erickson's link from One Free Korea, I was hoping for some creative proposal, not the throwing-one's-hands-in-the-air because this North Korea stuff is just too mind-boggling hard to think about. How about reassuring China that they have nothing to fear from a unified Korea under Seoul's control, by the US promising no American bases in former DPRK territory and Seoul promising that Chinese economic agreements made with Pyongyang will be honored?

His idea, I dare say, is like giving away your Lexus to a meth head as long as they promise to keep sending you money for bus fare.

Edited comment: I note that Mr Erickson's essay appeared at CenterMovement.org, a site that bills itself as a "journal and meeting place of the American center." Funny, I've long considered myself a moderate, and I thought that, when it comes to the military, the role of the moderate military is to remind the left of the value of a well-equipped and well-trained military and its role in acting as a deterrent, while reminding the right that its use should be prudent and well-reasoned and usually not as the first option.