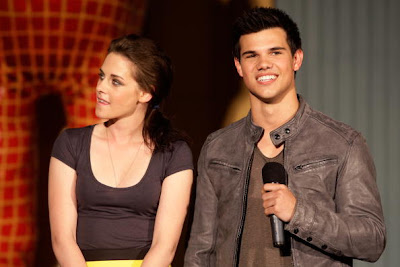 ... along with one of those other people from the Twilight franchise whose name is really not important to me, even though my oldest niece and my female teenage cousins all know everything about him.

Apparently fifty fans greeted them at Incheon International Airport, but the pair didn't take any pictures or sign any autographs (perhaps they had a tight schedule and they were fatigued after the long flight from Australia).

Note to the Korean press corps and Korean netizens: If Kristen Stewart gives a disinterested look and a vague answer that exudes an atmosphere of apathy and aloofness when she is asked about kimchi, Rain, or the Korean Wave, please do not be offended.

That is just the way Kristen Stewart and her on-screen persona Bella are. And since she says things like this, don't push her too hard. It wouldn't look good if her breakdown came at the hands of the Korean media.

Incidentally, I didn't realize Kristen Stewart was a girl until halfway through Panic Room. Won't make that mistake again.

UPDATE:
The media is finally catching up with this story (so here's another post). We have pictures of Kristen Stewart with Taylor Lautner (yep, I had to look that name up) coming from OK! Magazine, and more pictures from m&c, whoever they are. More pics here and here.

Here's one of the pics now: 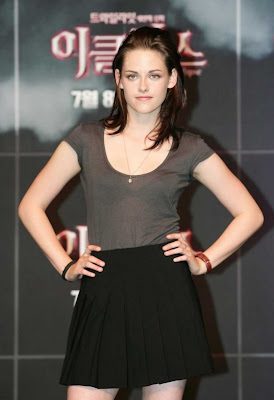 That's Kristen Stewart at the premiere of The Twilight Sage: Eclipse at the ritzy Shilla Hotel in central Seoul.

I've seen both of the previous films (at my niece's behest) and I must say they aren't that bad. There are worst things to do than watch Kristen Stewart and several sexy female vampires for two hours.

Oh, here's a Korean-language video of their arrival. I'm only providing this as a value-added service for all the people who have come here by Googling "Kristen Stewart in Korea."