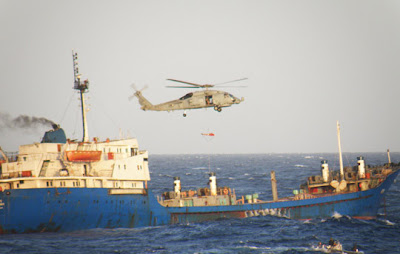 In a follow-up to this story from February, the crew of a North Korean cargo ship has retaken their ship and escaped their Somali captors.


The crew of the North Korean flagged general cargo ship RIM have regained control of the ship. It had been hijacked on February 3 and was being held at Garacad, off Somalia's northern coastline.

Yesterday, at 1010 local time, the RIM reported that the crew had successfully retaken control of the ship and that it was headed south. One crew members was seriously injured.

The closest EU NAVFOR warship, the Spanish frigate VICTORIA, which was 100 miles away, was directed to the scene to give medical assistance and immediately launched its helicopter.

On reaching the scene, th VICTORIA then sent medical assistance to the vessel and took the injured crew member on board for treatment.

It is believed that some of the pirates were killed during the retaking of the ship.